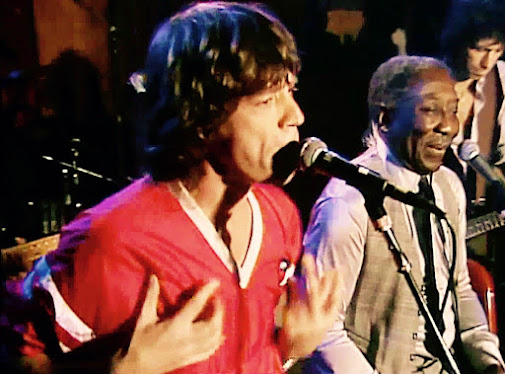 FreeV is very pleased to present a repost of what has been one of the top most visited posts on FreeV's Music Television channel online.

On November 22 1981, in the middle of their mammoth American tour, the Rolling Stones arrived in Chicago prior to playing 3 nights at the Rosemont Horizon. Long influenced by the Chicago blues, the band paid a visit to Buddy Guy's club the Checkerboard Lounge to see the legendary bluesman perform. It didn't take long before Mick Jagger, Keith Richards, Ronnie Wood and Ian Stewart were joining in on stage and later Buddy Guy and Lefty Dizz also played their part. It was a unique occasion that was fortunately captured on camera. Restored from the original footage and with sound mixed and mastered by Bob Clearmountain, this amazing blues night is right here.

Press the play button, choose high-res & full screen and you'll be able sit back and enjoy this music video automatically followed by several hours of handpicked music videos from different artists to explore. Press forward to skip any video or click the rewind button to replay or return to previous songs. Enjoy!

FreeV operates MusicTelevision.Com and The Indies Network of music & entertainment channels, below: